The Nigerian Women Football League (NWFL) has declared that the Osogbo Township Stadium is no longer suitable to host any of its league matches in the state.

This was made known in a letter dated December 6, 2021, with reference number NWFL/COO/ADM/NWPC/Vol.1/189 and signed by Modupe Shabi, its Chief Operating Officer.

According to the letter, the decision to declare the stadium unfit for league matches was arrived at after an inspection of the structure.

The letter, which declared that the current state of the stadium is not good enough to host any of the NWFL matches until it is fixed, also stated that the body hoped that the necessary facelift will be carried out on the stadium facility.

As a result of the directive, all home matches of the Osun Babes Football Club in the 2021/2022 NWFL Premiership Season will be played at the Lanre Leke Stadium, Ile-Ogbo, Osun State.

Ahmad added that if this were not met, appropriate sanctions was expected from the league management as in the case of Osun Babes.

In his words, “I could remember the last time NFF President, Amaju Pinnick came to Osogbo. He wasn’t satisfied with the condition of the pitch and promised to inform the Governor about it but nothing has been done up till now.”

While lamenting that it is unfortunate that Osun cannot have a standard stadium in spite of the high level of the state’s involvement in sports and the number of budding talents it has produced, Ahmad stressed that good performance of players and clubs is a function of a good pitch.

Expressing optimism that that state government will find a solution to the current problem, the Osun SWAN scribe noted that it is a challenge on those at the helms of affairs to do something on the pitch, dressing room and other areas identified by the NWFL.

“I hope there won’t be a double standard by NWFL cos there are many stadiums not up to the standard of Osogbo Township Stadium in Nigeria and league matches are approved to be played there. They should maintain fairness and justice in their decision to all teams,” he said.

The impact of the change in match venue he highlighted will be that Osun Babes will miss the support of many Osogbo fans, unfamiliar pitch in Ile-Ogbo, business opportunities near the Osogbo stadium will be negatively impacted.

Others he stated include; the stress of travelling between Osogbo and Ile-Ogbo for the players and loss of revenue for the FA and Sports Council due to free entrance to the match arena. 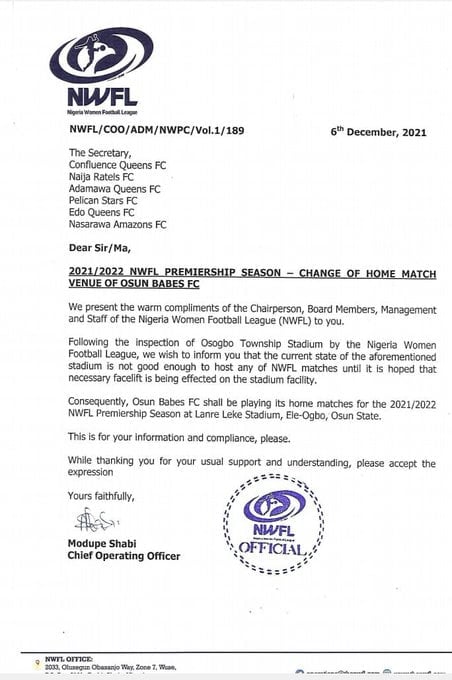