Sowore claimed that Osinbajo is as dangerous as President Muhammadu Buhari.

The RevolutionNow activist alleged that Osinbajo and Buhari plot the evil plaguing Nigeria together.

In a series of tweets on Monday, Sowore claimed that Buhari is deceiving Osinbajo with a succession plan.

According to Sowore, Osinbajo is informed about all actions taken by the current administration.

He wrote: “I’ve said it several times that @ProfOsinbajo is as dangerous as his principal, @MBuhari!

“They plot all the evils afflicting this country together.

“He’s in on every action of the regime. Because Muhammadu Buhari’s deceiving the Bozo that he plans to hand over power to him.

“He’s blabbing up and down. Buhari remains one of Nigeria’s most unpopular rulers ever! Buhari has no iota of credibility both as a human being or a “leader” Shame on miniman OSINBAJO.”

VELOXNEWS recalls that Osinbajo, speaking with top officials of Nigeria’s High Commission in the United Kingdom at Abuja House on Saturday, described Buhari as the most popular politician Nigeria has had in generations.

“The President is possibly the most popular Nigerian politician that we have ever had in generations. He is possibly the only person who can go into a place or somewhere without bossing people to gather and they will come and listen to him speak.

“We need that level of credibility to be able to solve problems in our country. And I think because of his level of credibility, despite everything, he is still the only one that can call everyone, and even people who do not necessarily agree with him know that he is a man of his words,” he said. 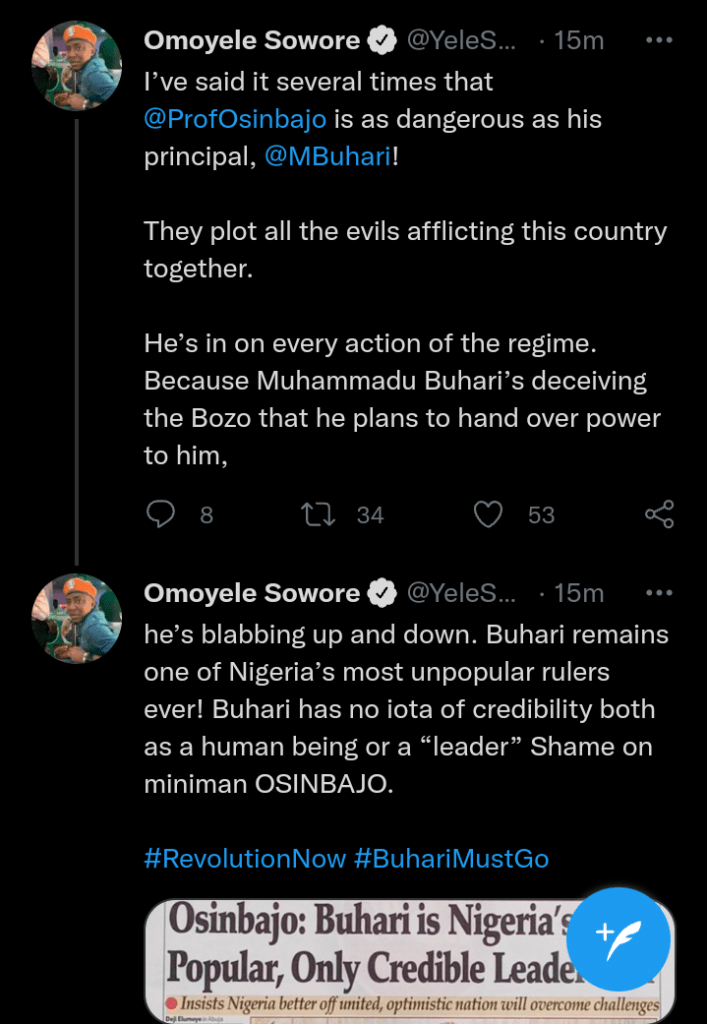