Dr. Monday Ubani, ex-2nd National Vice chairman of Nigeria Bar Association (NBA), has written to President Muhammadu Buhari on the abandonment of the dilapidated Umuahia-Ikot Ekpene road after a widely reported award of N13, 296,283,958.68 contracts for the construction and rehabilitation of Umuahia/Ikwuano/Ikot-Ekpene Road by the Federal Ministry of Works.

In a letter dated October 1, 2021, and addressed to Buhari, Ubani, a human rights lawyer, lamented that people had suffered enough concerning the sorry condition of the road.

His letter came on the heels of the recent protests by students of Michael Okpara University, Umudike, in Abia State, asking the government to repair the deplorable Umuahia-Ikwuano-Ikot Ekpene federal road which many linked to the reported death of a 500-level student of the Department of Fisheries and Aquatic Resources of the institution, Miss Chidinma Ogbonna, who was killed instantly after being hit by a trailer driver.

A copy of the letter was forwarded to Abia State Governor, Okezie Ikpeazu; Minister of Works and Housing, Babatunde Fashola; Senator T. A Orji, Hon Sam Onuigbo, House of Representatives Member representing Ikwuano/Umuahia North/South Federal Constituency and the Director in Charge of the road, Ministry of Works and Housing. 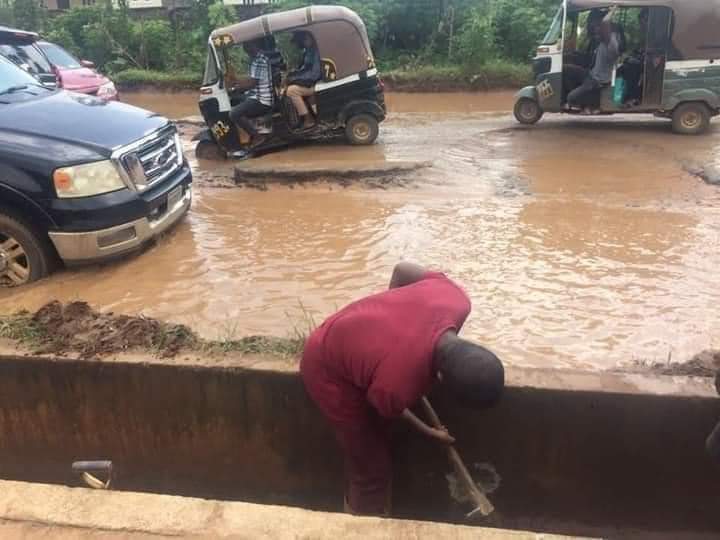 He said, “Despite our joy for the award, some of us raised an initial alarm concerning the contract because of lack of specifics in the disclosure about the terms of the contract. Does the contract include construction, dualization, or just mere rehabilitation? That narrow road constructed during the colonial era now links Abia to Akwa Ibom and Cross River State down to Cameroon in West Africa and is used frequently by big trucks and other users for their commercial engagements”.

The Chairman of NBA-SPIDEL, queried “Why will such an important road be left without dualization and proper reconstruction that has a good drainage system? How competent is the contractor that is handling the contract for the construction of the Umuahia (Ikwuano)/Ikot Ekpene Road axis? The level and quality of work so far done on the Ikwuano leaves a sour taste in the mouth.

“The little drainage work done at some of the places in Oboro area of the contract does not show that there is any good intention to do a thorough work that will surely stand the test of time and beneficial to the users of the road. The quality is not only below standard, but it is also utterly poor.”.

He appealed to President Buhari to cause the release of funds for the continuation of the work of the contract on the said road and ensure maximum supervision of the quality of work that is being carried out on that road that has socio-economic advantages to the entire nation.

According to Ubani, “We believe that your government will not join other governments that failed to fix this very important road that is critical to the survival of the indigenes of Ikwuano in Abia State.

“Your Excellency, we are shocked at this report of “No Fund Release”. The question will be why would a contract of such importance and magnitude be awarded with no intention to complete the project especially when the objective of the award was made known to the whole world?

“Now as I put down this piece to you sir, the road is in the worst condition ever, the people are suffering daily commuting on that road. A journey of about 30 minutes now lasts about 3 hours due to the terrible and unacceptable condition of the road. Our joy has turned to sorrow as the people are daily subjected to the gravest level of suffering while going or returning from their daily work. The objective of providing motorable roads for the economic activities of the people has been defeated by the current turn of events.”